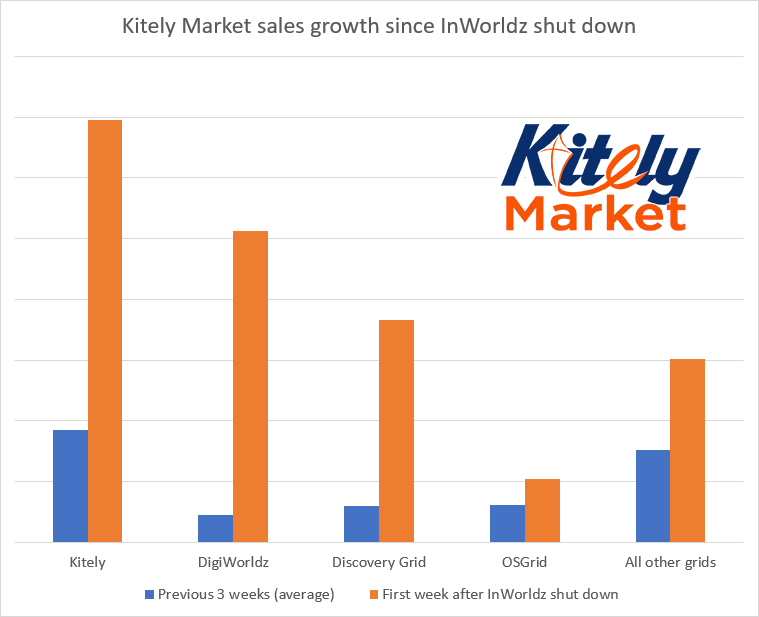 On 2nd August 2018 Ilan Tochner the CEO of Kitely announced a new record of a 300% sales jump on the Kitely Market since InWorldz shut down last week. This is a huge jump in sales growth for the popular Kitely Market.

DigiWorldz and Discovery Grid saw increased growth in sales during the past week. Other grids most likely saw increased sales too.

Check out the Kitely Market here

InWorldz, one of the oldest and largest OpenSim grids, has recently shut down. Since then, many InWorldz residents have moved to other grids in search of a new home. Thanks to Kitely Market, we now have some hard data that shows the scope of this exodus, as well as which grids were the preferred destinations for InWorldz residents.

We have seen a remarkable 300% spike in Kitely Market sales since InWorldz has shut down, as users that moved to new grids began restocking their avatar inventories. InWorldz didn’t allow its residents to use Kitely Market, so for many of these users this is the first time that they’ve been able to buy from our marketplace.

We saw Kitely Market sales begin to rise on July 26, a day before InWorldz shut down. The graph below compares sales from the week since InWorldz shut down, to the average weekly sales in the three weeks before that. Kitely’s own grid experienced the biggest growth in absolute numbers, but DigiWorldz and Discovery Grid experienced the most growth relative to their previous sales levels.

(2nd August update) – Looks like InWorldz 2.0 will be called the Infiniti Grid http://www.infinitigrid.com

Poll Results: What grid have you moved to after the closure of InWorldz ?