On 1st April Patch Linden announced the new release of Log Homes on the official Second Life forums. The Mole team have now added 4, 828 new Linden Homes for everyone to move into. It’s the biggest release to date spreading over 230 regions which is located east of the Bellisseria continent.

A new community center is coming very soon along with more new regions full of different types of homes. Its great news the Moles have finally released these new homes.

Its going to be fun to explore the new continent in the days and weeks ahead.

After weeks of waiting Linden Lab has finally added a brand new Linden Homes sub forum section on the Second Life Forums. In recent months and weeks there many active SSP/Linden Homes threads all over the place but now it’s been all moved to one handy section.

Linden Homes appears under the Land Forum when you scroll down the page. 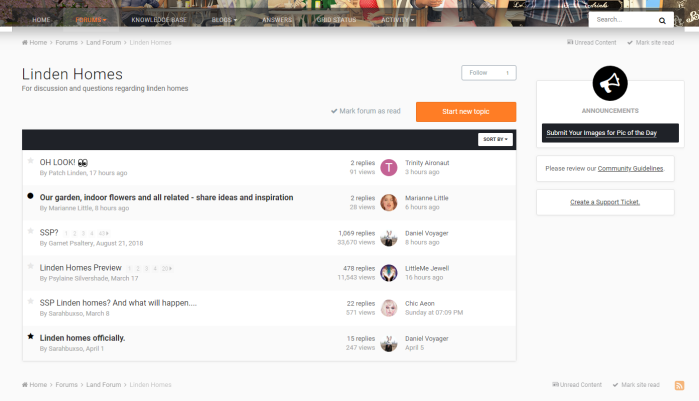 The old SLUniverse Forums have officially closed down as of 10th October 2018 after last month’s closure announcement. The old forums will be now archived and will be brought back online sometime during the next few months.

The new forum site called VirtualVerse One has been up and running for a few weeks now. There are active discussions going on everyday on the Forum list featuring a great range of topics from virtual worlds, Second Life, OpenSim, Sansar, Gaming, TV & Films to Scripting and much more.

So far on the new forums there have been 463 threads, 6, 836 messages and over 390 members. It’s a great resource for the latest news, buzz and statistics.

Cristiano the owner of the well popular SLUniverse has announced it will be closing down in the next few weeks after recent issues. The SLUniverse Forums will become archived (read-only) and could be unavailable for some time after the closure.

SLU has a been a great source for the latest news in recent years for me. It’s sad to see it go but at least it’s still going on a different way. I joined SLU back in 2010 and I have enjoyed being part of this community.

So a lot has happened in the past 24 hours. I nearly lost 2.4 million posts and obliterated SLU, got them back, perhaps may have cried a little, then made some decisions about what to do about SLU.

I detailed what I was going through my mind in this post, so I won’t repeat it. However, since writing that, I made some rapid decisions that are already in motion.

First of all, I am launching a new site – VirtualVerse, which expands the scope of SLU to all things related to virtual worlds, whether it is Second Life, Sansar, other VR worlds that are gaining in popularity, or game related worlds like MMOs and open world games. I’ve wanted to become less SL centric, but it has been hard to do that with SL as part of the name.

The SLU forums will be closing within the next few weeks, depending on how long the transition takes. These forums will be archived – they may be unavailable for little while but will come back as a read only forum.

The good news is that SLUniverse is still going to live on but just in a different format on a new site called VirtualVerse which still includes all things Second Life, Sansar, Virtual Worlds and VR etc.

The new forums will be using Xenforo forum software and not the existing vBulletin forum software. It fully supports mobiles which is great. The forums have a light and dark theme to pick from at the moment.

What do you think about this transition from SLUniverse to VirtualVerse ?