Melanie Thielker who the owner of Avination Grid has confirmed the following:

I first joined Avination on 17th January 2012 and since then I’ve blogged about the Avination grid from community events, big news stories, grid improvements and much more. Back then there were 592 regions, 43, 787 registered users with 3, 226 unique logins (past 30 days). The Avination viewer was 54.9MB in size back then running version 1.5.8.

On the Avination login screen updated recently in 2017 there are 81, 424 registered users, 492 regions with 399 unique logins (past 30 days). These screenshots are from my first day when I arrived at the welcome area of Avination.

It’s a real shame this is the end of Avination now and this is a huge loss for the OpenSim community moving forward I think.

I gather from this now that the current use of Linden Dollars will now be restricted to just Second Life. Other opensim grids/virtual worlds will have to come up with other ways around this issue if not already.

I received this email today about the cut in transfer of Linden Dollars to other virtual worlds.

Due to recent interaction with Linden Labs, we regret having to inform you
that the transfer of Linden Dollars to Avination is no longer available,
including the payment of your Avination sims via the Avination ATMs.
Following discussions with Linden Labs they have advised that any use of
Linden Dollars in payment for currency of ANY other virtual world, or for
external services which are not used in SecondLife ™ is in violation of the
TOS.

Avination Management has attempted to discuss this matter with Linden Labs by
reiterating the importance of this option as well as trying to understand how
this is a violation of TOS, but unfortunately these talks have since broken
down.

Linden Labs’ Lawyers are adamant that these TOS clearly state that Linden
Dollars cannot be transferred. This stance will not just affect us as at Avination but could also see far reaching consequences for other companies considering legal use of L$, including services like Shoutcast Stream Rentals and other services rendered outside of SecondLife.

Unfortunately, for our loyal users and us this means an end to offering a fast
and convenient way of exchanging Linden Dollars to C$. According to Linden Labs, users of SecondLife must cash out through LindeX before using the real currency to pay for services not rendered within SL.

We are sorry for the inconvenience this will cause you and please accept we
have tried everything in our power to reach an amicable solution with Linden
Labs.

What do you think about Linden Lab restricting use of the Linden dollar in other virtual worlds ?

Avination grid will be celebrating it;s fourth birthday from Friday 12th September until Sunday 14th September 2014. There will be live entertainment, live DJs and much more. Visit the AVN4B sims on the Map to see the amazing exhibits and enjoy with friends.

See the full event schedule and lineup below for AVN4B.

Topics to be discussed at the meeting…

Visit the official Avination homepage to discover more about the grid.

2013 has been a great year for OpenSim with huge growth in regions, users and active users. This month the top 40 OpenSim grids passed the big 30, 000 regions mark and now has nearly 4,000 more regions than Second Life. I would imagine the positive trend will continue into 2014 and 2015+.

For the first time on my blog I’m highlighting the big opensim memorable events and new records from 2013 that I’ve covered this year.

Avination grid is celebrating it’s third birthday on OpenSim this weekend and it’s bigger than ever before. Visit the AVN3B Event Area and celebrate with the Avination team/community. There are nine regions to explore this year full of amazing quality builds and much more. It’s expected that there will be larger audience than in previous years and i’m sure that everyone will have fun this year. 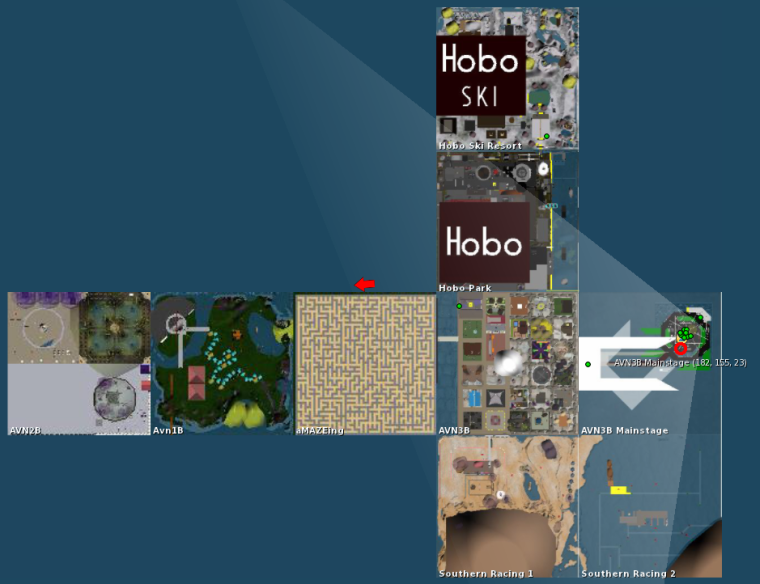 The party is under-way at the main stage of AVN3B 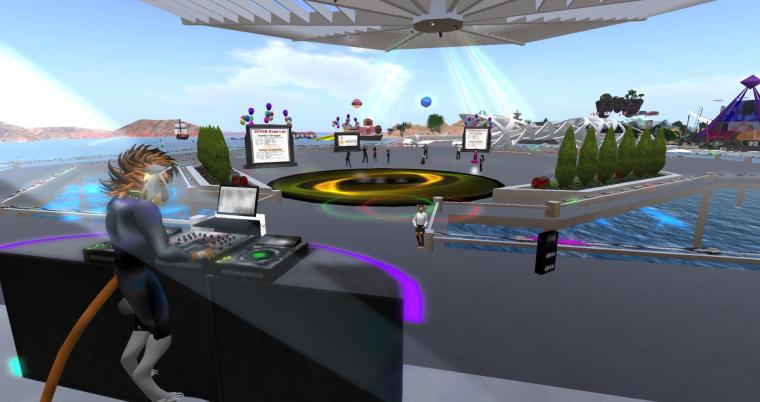 More snapshots of AVN3B can be found on my SL Flickr stream.

Avination grid will be celebrating it’s third birthday anniversary this weekend from Saturday 31st August to Sunday 1st September 2013 which is open to everyone to attend. New/updated event details have been published for AVN3B which can be viewed below featuring top DJs who will be playing great music.

At the AVN3B regions there will be a 3D maze, amusement park, ski resort, racing, music, freebies and much more. 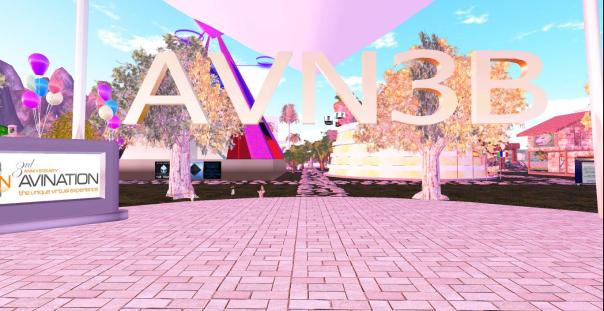 It’s getting closer…
The Party Of The Year. Avination’s 3rd Birthday on Aug 31-Sept 1. There aren’t many exhibit parcels left so come and get yours quickly. Contact Holger Gilruth (German) or Gord Devonshiire (English) for more information.  Share your wares at the best attended party of the year! Huge 3D maze, Amusement parks , Ski Resort, Racing of all kinds, Music and much much more!!!

For the latest news visit the official Avination Blog.

New details has been released on upcoming Avination grid 3rd birthday celebrations which will take place from 31st August to 1st September 2013. There will be DJ music, birthday builds and events to celebrate three amazing years of the Avination grid on opensim. IM Gord Devonshire. Holger Gilruth or Holger Gilruth for more info.

Last year I loved the theme park rides, a sim maze and many birthday gifts. View my snapshots from at AVN2B.

I’ll be blogging more during the birthday. 🙂

Here are my snapshots of the new Avination version 0.4.0. 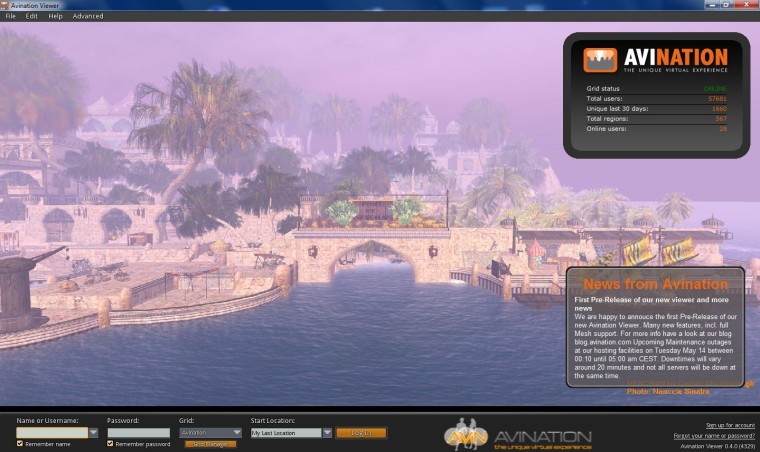 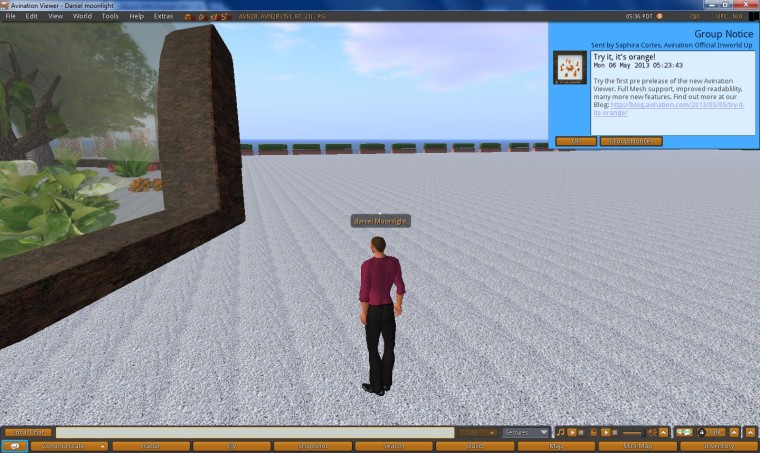 Apparently there are more major new developments coming in the pipeline. A new script engine and new improvements is in the works. Media on a Prim is still under the “implementation” phrase.

While checking the Avination Google+ page I saw a very interesting post by Leonie Gärtner about a new opensim development during a recent grid restart. Apparently Avination has introduced Multi Attach where you can have up to five attachments worn at the same time which sounds pretty interesting to try out. This is going to open up many possibilities on opensim grids and SL.

Today, with the latest restart of their grid, Avination introduced Multi Attach support to their server software.

While being available at Second Life this feature has not been implemented yet at any OpenSimulator based grid.

Like the already supported Multi Wear, a feature important for clothing designers and furries wanting to dress themselves decently, Multi Attach allows the same for attachments.

One avatar can now not only wear one attachment at each attachment point, but up to five attachments at the same time.

Good for tasks like building a log house for carrying nails and hammer in one hand! Imagine Roleplay – now you can wear armored gloves while wielding the Sword of the Ancients at the same time.