Most Viewed Blog Posts of 2018

Thanks to everyone that has viewed my blog this year and commented. Thanks to all those that have subscribed to my blog during 2018. I loved attending the annual events, helping out when I can and blogging about what’s going on. It’s been great fun.

I can’t wait to blog more on Second Life, OpenSim and Sansar. I’m sure it’s going to be another interesting year for sure.

Just like to say finally happy new year 2019 to everyone. Let it bring you more happiness and more amazing memories.

I have included various bits on OpenSim and Sansar. I’m looking forward to more blogging in 2019.

In mid July it was reported that there were two weeks of private regions growth in Second Life after the lab announced the new pricing restructuring. It’s good to see the grid growing again.

The well known InWorldz grid closed down after financial difficulties. This was a big blow to the entire OpenSim community and many decided to move to other OpenSim grids (The Adult Grid, DigiWorldz, Discovery etc). InWorldz was one of the first OpenSim grids I joined back in 2010.

The Shelter in Second Life turned 14 on 20th August. The Shelter is one of the oldest resident run help organisations on the grid.

A brand new continent appeared north-east on the Second Life map. The region names SSP1 to SSP80. Since then the continent has grown in size to 384 regions and it still remains closed to the public. Many have been saying it will be used for new Linden homes or possibly games.

The Relay For Life of Second Life team officially decided to start the 2019 season a month earlier. The kick off event starts at 10am SLT on Saturday 16th February and the annual Relay Weekend will happen on 8th & 9th June 2019.

Ebbe Altberg held a town hall event with the Second Life community talking about the important things the lab have been working on including last names, tier rates, Linden homes, the cloud, premium subscription options and much more.

Linden Lab revamped the Second Life Join Page making it easier to join than ever before. Everyone joining for the first time today can now choose their avatar type and membership level. Hopefully in 2019 the ability to change/choose your last name will happen.

Linden Lab decided to block the third party Android viewer “IM to SecondLife“. Apparently the block was due to serious violations of the policy on the Third Party viewers page.

Second Life and OpenSim communities received some sad news that Google+ was going be closing down in Q1 2019. For most I think now is the time to leave Google+ and try out other social networks.

The old SLUniverse Forums were closed down in early October. The new VirtualVerse One has been up and running for the past few months now. It’s very active and the community is growing pretty nicely.

Linden Lab announced some good news on getting 50% off your first payment on new monthly premium membership subscription.

Linden Lab made a major announcement that Sansar will be moving over to the popular Steam platform and dropping Sandex. Since the launch on Steam on 5th December 2018 the usage numbers have not been very high. It will be interesting if the numbers can improve during 2019.

Sansar reached a peak of 73 visitors via the chart for monthly public visitors. The number of experiences surpassed 1, 100 in late 2018. It will be interesting to see if the usage stays the same or increases throughout 2019.

Linden Lab sent out a statement on creator rights and IP protection for creating content in Second Life. In the statement the lab writes “recently, there’s been some debate about one of the more esoteric aspects of content creation, which impacts many in our community”. That debate is around the use of UV maps in mesh heads apparently. There has been a report of one designer issuing DMCA notices against many creators in Second Life.

Linden Lab announced some good news that Project Animesh had been released grid wide. It’s now in the default viewer download and all regions on the grid support Animesh.

Things that I took away from the town hall meeting..

The Pfaffenthal 1867 regions closed down in Second Life and moved to Sansar after having a strong presence inworld for many years. Pfaffenthal 1867 is moving over to Sansar because the land is free, the graphics is better, the use of VR headsets and real physical interactivity.

The results are here for the recent Virtual World Economic Situation #1 Survey that was released last month. There were 124 total responses for the survey and the graph visuals are pretty interesting to say the least.

At the end of November LEA announced that will be temporarily closing it’s residence regions (LEA 10 – 29) from 1st January 2019 to allow for major restructuring.

Sansar officially launched on Steam on 5th December 2018. It’s going to be interesting to see if Sansar can now reach a much bigger audience with it now being on the Steam platform. We will have to wait and see. Sansar now has greater potential to reach thousands of users in 2019/2020.

Google announced that Google+ will now be shutting down in April 2019 after the company suffered another data leak effecting 52.5 million users.

The Firstorm team released the Animesh Beta viewer. The full Animesh supported Firestorm release will be coming in early 2019. This new viewer release 6.0.1 is now fully merged to the 6.0.0 Linden code-base. There are plenty of changes, bug fixes, improvements in this latest release. Full Change Log

You can expect to see more improvements made to Second Life in 2019 including new grid-wide experiences, the ability to change your name, migration to the cloud and Linden Home updates.

Animesh and EEP will improve greatly next year I think. Second Life will have its 16th birthday in June 2019. The birthday events are always big and exciting. The new SSP regions are still being worked on and the lab will reveal details on that next year. 2018 has been a good year for region growth in Second Life I think after years of the grid declining. Hopefully the growth trend will continue in 2019.

I’m looking forward to all the annual events and more adventures next year.

There is a few things that are pretty worrying though Flickr and Google+ in 2019. Flickr because of the recent account changes they have made (your safe if you upgrade to PRO) and Google+ because it’s shutting down in April. Both of these platforms have a strong Second Life user-base and next year it’s going to be a pretty rough I think.

I think OpenSim will continue to do well and I guess the big question can Sansar draw in more users on Steam in 2019 ?.

It’s going to be an interesting 2019 ride for sure. Anything can happen and I’ll be ready to blog about it. 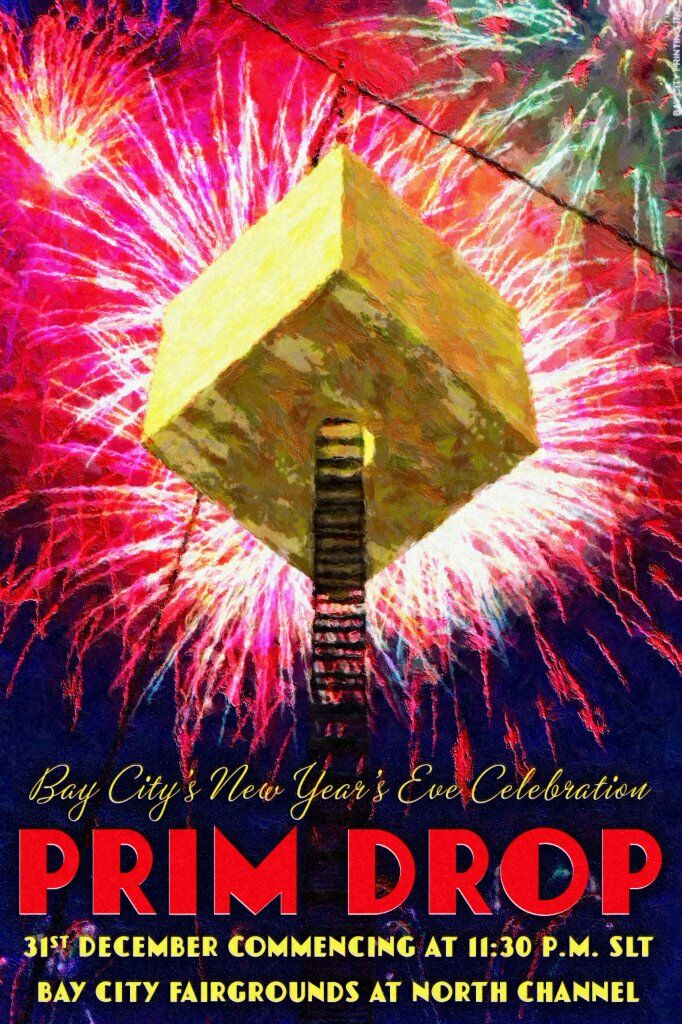 Bay City will be hosting their annual prim drop event on new years eve starting at 11.30pm SLT on Monday 31st December 2018. The event will be happening at Bay City Fairgrounds at the North Channel region in Second Life.

Earlier this year Bay City celebrated their 10th anniversary in Second Life which was incredible. I’m sure 2019 will be another awesome year for Bay City events in Second Life.

Food and drink will be provided. There will be a hour long DJ playing tunes to bring in the new year too.

Everyone is welcome to attend to celebrate the new year 2019 in.

As there is one week left of 2018 it’s now a good time to reflect back at 2018. This is part 1 looking at the first six months of 2018 in Second Life, Sansar and OpenSim. There have been many great memories and some not so good moments this year.

One Billion Rising opened in Second Life for 24 hours over four regions. Hundred’s of visitors attended and danced for hours.

My blog reached 600, 000 hits and 700 blog followers which I was very proud about. I hope for more blog hits and blog followers during 2019+. Again thanks so much for subscribing and spreading the word this year.

Linden Lab reduced mainland costs by 10 percent and doubled the mainland allotment for premium members from 512 sq to 1024 sq meters for free. Many have said for ages that the cost of land is too darn high in Second Life.

Ebbe Linden talked at VWBPE 2018 about VR, Second Life, Sansar, education, land prices and much more. There was no major announcements this year to mention but rather small updates.

The attendance was pretty good this year for both inworld and online numbers. A few Lindens made a special appearance at the Main Auditorium and it’s always great to see them wondering around.

It was announced that OpenSim total land area was still increasing month on month. The biggest grid on OpenSim back in March 2018 was the OSGrid followed by the Atek Grid. Since the summer Hypergrid Business decided to stop publishing regular statistics.

Linden Lab published a new SL15B in preparation for the 15th anniversary celebrations. The new Infographic shows the total number of Second Life accounts there have been, the total time users have spent in Second Life. new registrations, virtual goods created in the marketplace, chat messages sent daily and the most popular categories on the Second Life Destination Guide.

There was a special town hall event with Ebbe Linden which was pretty interesting on Second Life and Sansar developments.

Linden Lab opened up a new Instagram account in celebration of the 15th birthday celebrations that took place in June 2018. Follow and discover the latest cool experiences.

A pretty quiet month apart from Bay City 10th anniversary celebrations that took place in mid May 2018.  The annual parade and live concert took place with big attendance numbers. The live performers did a great job this year and the organisers.

Ebbe Altberg and Philip Rosedale was featured on Second Life 15th birthday video. Ebbe was in the video speaking from Amsterdam. Ebbe mentioned that 68 million US dollars was paid to creators in 2017. 5 million virtual goods listed in the marketplace. Linden Lab are moving massive amounts of infrastructure into the cloud. At the end of the video there is a special surprise appearance from the founder of Second Life Philip Rosedale.

Second Life officially turned 15 years old on 23rd June 2018. Second Life is still one of the best virtual worlds out there today and still going strong. Here’s to another 15 years and more!