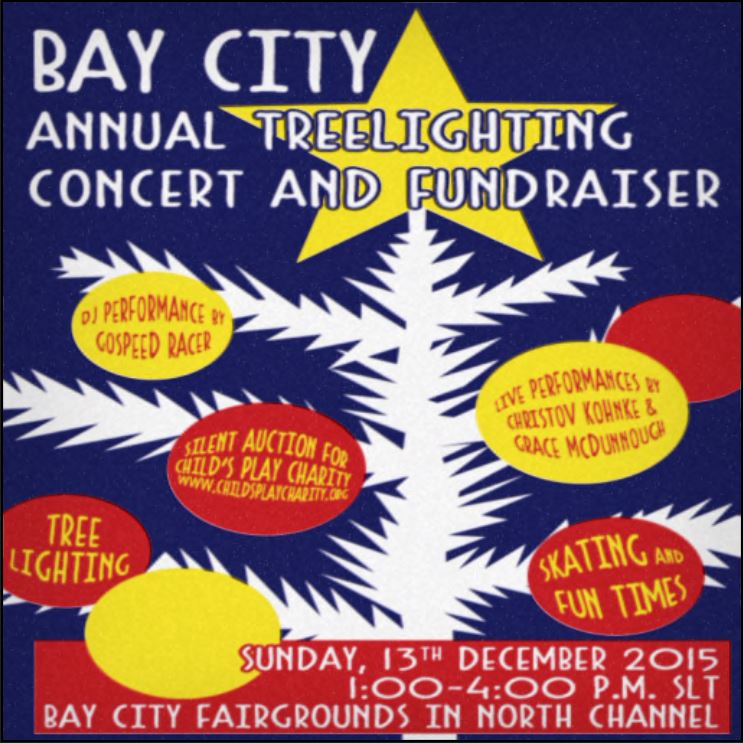 BAY CITY, SL (27th November, 2015) – The Bay City Alliance will host its annual Tree Lighting event on Sunday, 13th December 2015 from 1-4 pm SL. The event will be held at the Bay City Fairgrounds, in North Channel ( http://slurl.com/secondlife/North%20Channel/128/128/24/ ) and will feature DJ GoSpeed Racer and live performers Christov Kohnke and Grace McDunnough. The event will also feature ice-skating, dancing, refreshments and lots of fun for all!

Since December of 2014, Bay City has raised US$1,675.00 for Child’s Play Charity (www.childsplaycharity.org) and as part of the event, a silent auction will again be held to support them. We are asking Second Life™ designers and artists to participate by providing fun, interesting, unique, or other transferrable items (or a no-copy object that the auction winner can give to you to redeem their prize, if the item(s) have to be no transfer). Please contact Marianne McCann to participate.

Auction will end at the conclusion of the event. All proceeds from the silent auction and from donation bins at the venue will go to Child’s Play Charity. Child’s Play is a 501c3 non profit organization offers online communities such as ours an opportunity to help seriously ill children around the globe during their hospital stays with the purchase of games and gaming equipment.

For more information, or to participate in the event, please contact Marianne McCann