Today Linden Lab has announced SLShare on the official SL blog which is a brand new feature to share content with SL friends on Facebook. This may be a useful feature to have in the viewer instead of logging and sharing things directly from Facebook. SLShare is a “100% opt-in Viewer feature” to share updates, snapshots and check-in SL locations from in-world straight to the Facebook wall which sounds great. In the coming days/weeks this feature will be rolled out to all Second Life residents. Once it’s rolled out it comes with a opt-in feature with default privacy settings and a way of opting out again. This feature will be very similar to https://my.secondlife.com/ which has been very successful over the years.

Can I try this out now ?

SLShare isn’t yet available for everyone, but starting today, a certain percentage of users will begin to be able to access the feature, and we’ll soon rolling it out to everyone.

In this limited release viewer, we offer a 100% Opt-In way to share status updates, upload photos and check-in to locations in Second Life, to Facebook. Users access this feature via a new floater button found in “Me>>Toolbar Buttons…” called Facebook.

Until this feature reaches the default Release viewer, users must be running this viewer for this feature to be used.

My snapshots of the new SLShare feature today! 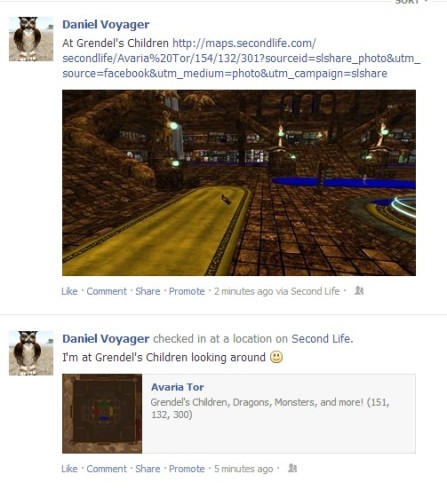 On the homepage of The Verge there is a new interesting article about Second Life written by Chris Stokel-Walker and so far there’s been 157 comments which ranges in views.  Most are talking about the layout choices and how they don’t like SL. However the other half are positive and are supporting Second Life. The actual article looks at Second Life during the past ten years mentioning stats and the community that still exists today.

Here are the parts that I found interesting in the article ..

You might not have heard a peep about it since the halcyon days of 2006, but that doesn’t mean Second Life has gone away. Far from it: this past June it celebrated its 10th birthday, and it is still a strong community. A million active users still log on and inhabit the world every month, and 13,000 newbies drop into the community every day to see what Second Life is about. I was one of them, and I found out that just because Second Life is no longer under the glare of the media’s spotlight, it doesn’t mean the culture inside the petri dish isn’t still growing.

In Linden Lab’s vast experiment, the end has no end

When mainstream media outlets touched down in Second Life seven years ago they tended to focus on the strangeness of it all. People were having sex through a game and dressing up as foxes and kittens. The reality, says Tom Boellstorff, a professor of anthropology at the University of California, Irvine, is more prosaic: “Humans already live many different kinds of life: online is just one more of those kinds of lives.”

People come to the Second Life universe for different reasons: some go there to escape their reality and to stretch the boundaries of their lives in ways forbidden by the constraints of their bodies or the norms of society. Some go to meet friends and family; there are some who want to create buildings, paintings, and whole new worlds. And some — big companies and small entrepreneurs — hope to make a living.

Second Life has survived its first 10 years, but every society rises and — inevitably — falls. So what of Linden Lab’s creation? Will people still be living Second Lives in 2023?

What are your views on this article and do you think Second Life will be still online in ten years time ?