Great news today is that Avination grid team has announced through a press release that they will be sponsoring and attending the OpenSim Community Conference this weekend. OpenSimulator Community Conference will be starting in less than 1 hour and there is so much exciement about the first official OpenSim conference. The first keynote speech will be about the future of opensim starting at 7am PDT on the conference grid which should be very interesting indeed.

Map of the OpenSim conference regions 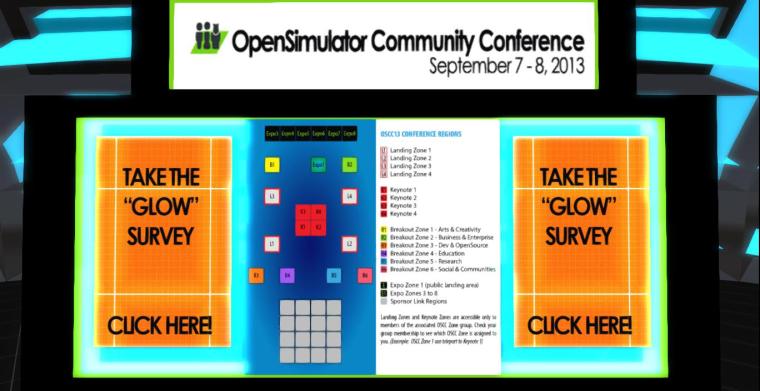 Avination is sponsoring and attending the first annual OpenSimulator Community Conference on September 7-8, 2013

The first annual OpenSimulator Community Conference will open on September 7, 2013 and Avination, one of the main contributors will not only be part of it but also co-sponsoring the event! It is the first conference of its kind especially for the OpenSim Community, a gathering of OpenSim’s developers and users. Various speakers will talk and discuss the future of OpenSimulator’s development, the social aspects of virtual worlds, discuss about community building or content protection.

Melanie Thielker, well known core developer of OpenSimulator and CEO of Avination Virtual Limited will speak at the first keynote session on Saturday, September 7, 2013 about the Future of OpenSimulator and later that day at the breakout session 4 about “Hypergrid: Now and in the Future” “The future of the internet is in three-dimensional worlds. Hypergrid is an integral part of it and we core developers are avidly working on improving content protection to make Hypergrid safe and acceptable for creators.” says Melanie.

At a similar themed session on Sunday she will discuss Copyrights and Content Protection in OpenSim.

Yet this is just the plain and maybe dry conference part of the OSCC.

For the social part Avination, is proud to announce the well know and famous live musician Torben Asp. Just returned from his well received US-tour he will play his unique Ambient music with influences from Jean Michel Jarre, Kraftwerk and Schiller at the Avination Exhibition Sim with his extraordinary light show.

At both breaks between the sessions, Avination A-Team and Helpers will be online at the Avination Sim to meet and greet to answer question and give answers about Avination.

Less than 1 hour left to go until the opening!