Great news to announce that there will be a 2nd official season of Relay For Life on the grid of InWorldz which kicks off from 9am on  Saturday 24th August 2013. I’m really looking forward to the 2nd season of Relay for Life of InWorldz 2013 to see how it compares.

Last year for the first ever season of InWorldz there was a grand total of 64,000$Iz+ raised for the general fund of Relay for Life of InWorldz. The first season was a great success for 2012 because of the participation of IW residents. The aim for 2013 is to break new records and hopefully have more joining in during the RFL events.

A new press release has been released this week with the good news about having another season .

Relay For Life of InWorldz 2013 Season

COMMUNITY TO UNITE TO FIGHT CANCER

American Cancer Society Relay For Life of InWorldz Kicks Off

InWorldz community members will unite at a Kick Off Celebration to officially launch the second Relay For Life season. Hundreds of participants will ring in the new season with a rally that educates everyone on how their involvement benefits the American Cancer Society’s goal to save lives and create more birthdays. Money raised will fight cancer by helping people stay well and get well, by finding cures, and by fighting back.

Relay For Life Kicks Off its official drive on August 24th at 9 am InWorldz time on Paradise by Design. 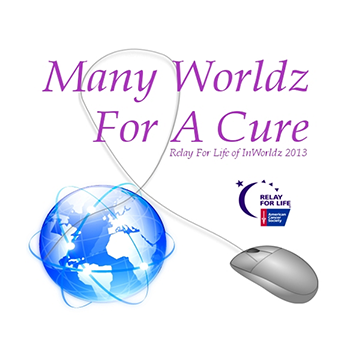 The American Cancer Society Relay For Life is an overnight community celebration where individuals and teams camp out, picnic, dance, play games and take turns circling around a track “relay” style to raise funds and fight cancer.  The event opens as cancer survivors lead the way around the track and are honored with the Survivor Lap.  As the sun begins to set, the warm glow of hundreds of luminaries light the field in an emotional silent ceremony. Each bag lit is in honor of a loved one who won the fight against cancer or in remembrance of a special someone who lost their battle. The American Cancer Society Relay For Life represents hope in that those lost to cancer will not be forgotten, that those who face cancer will be supported, and that one day, cancer will be eliminated.

Started in 1985, Relay For Life began with one man who circled around a track for 24 hours raising $27,000.  This year, Relay For Life has grown to more than 6,100 communities and over 20 countries worldwide.

Come share the celebration with us, to begin a campaign we cannot lose.

** We Celebrate Life, But We Fight For The Cure **

The American Cancer Society combines an unyielding passion with nearly a century of experience to save lives and end suffering from cancer. As a global grassroots force of more than three million volunteers, we fight for every birthday threatened by every cancer in every community. We save lives and help people stay well by preventing cancer or detecting it early;  being a support system for them during and after a cancer diagnosis; finding cures through investment in groundbreaking discovery; fighting back by rallying lawmakers to pass laws to defeat cancer; and by rallying communities worldwide to join the fight. As the nation’s largest non-governmental investor in cancer research, contributing about $3.4 billion, we turn what we know about cancer into what we do. As a result, more than 11 million people in America who have had cancer and countless more who have avoided it will be celebrating birthdays this year. To learn more about us or to get help, call us any time, day or night, at 1.800.227.2345 or visit cancer.org.