On Tuesday 4th September 2012 Oz Linden on the behalf of Linden Lab said that Firestorm viewer has taken over the number one spot on the list of Second Life viewers. Firestorm users are spending longer time in the viewer (total user time) and even more than the previous Phoenix viewer. Firestorm is now the most stable viewer and popular viewer in Second Life.

It’s nice that Linden Lab have noticed this happening and I would like to say congratulations to the Firestorm Viewer team for being the number 1 viewer in Second Life today and for making SL a better place. I hope there will be a list of viewers usage stats somewhere public because that would be interesting. This email below was sent via the opensource-dev mailing list. There are more details on the Official Phoenix Firestorm Blog post by Jessica Lyon.

Snapshot of the email 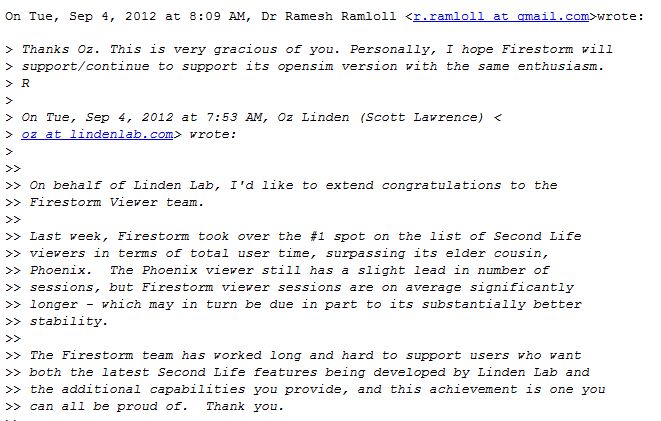 On behalf of Linden Lab, I’d like to extend congratulations to the Firestorm Viewer team.

Last week, Firestorm took over the #1 spot on the list of Second Life viewers in terms of total user time, surpassing its elder cousin, Phoenix. The Phoenix viewer still has a slight lead in number of sessions, but Firestorm viewer sessions are on average significantly longer – which may in turn be due in part to its substantially better stability.

The Firestorm team has worked long and hard to support users who want both the latest Second Life features being developed by Linden Lab and the additional capabilities you provide, and this achievement is one you can all be proud of. Thank you.

Awesome news and this is a fantastic achievement for the Firestorm team.