A leap year is a year in which an extra day is added to the calendar in order to synchronize it with the seasons. Since the tropical year is 365.242190 days long, a leap year must be added roughly once every four years (four times the fractional day gives

). In a leap year, the extra day (known as a leap day) is added at the end of February, giving it 29 instead of the usual 28 days. The leap year was introduced in the Julian calendar in 46 BC.

The year 2008 is a leap year. If you look at a 2008 calendar, you will see that February has five Fridays–the month begins and ends on a Friday. Between the years 1904 and 2096, leap years that share the same day of week for each date repeat only every 28 years. The most recent year in which February comprised five Fridays was in 1980, and the next occurrence will be in 2036. February 29, the leap day, has been associated with age-old traditions, superstitions and folklore.

This is great news for Teen Second Life, I have heard from many sources and from Blue Linden there will be 12 new city sims on the way soon to TG, this is part of LDPW = Linden Department of Public works project. It would be nice to have different theme sims instead of it all being City Sims that is what I think, but hey TSL is finally expanding again.

Please visit tbese links below to find out more info and how you can take part!

This was a really interesting video which I found on YouTube by searching for “Teen Second Life”. It was great to see TSL Orientation Island again because the last time I saw it was back in October 2006 when I joined TSL, does not look any changes have been made there, maybe soon tho!

The Tech Museum of Innovation has just launched a major new exhibit creation initiative in Second Life and they want you, in TSL!

They currently offering $5000 prizes for the best interactive RL exhibits on technology in art, film, and music designed in Second Life.

Guest speaker Avi Markova, the approved adult organizing the project and RL museum exhibitor, will speak about how the museum is changing the way they do RL exhibits by inviting those in SL to create inworld exhibits that can be built in real life! No previous curation skills needed!

Come find out how to be part of this amazing contest!
Wednesday, February 27th, 1pm PST/SLT @ the main stage at DIDI Island!
http://slurl.com/secondlife/The%20DIDI%20Initiative/182/108/22

Exhibits hosted in TSL by Eye4You Alliance!
Be ready for a field trip to the exhibit space on Eye4You! Landmarks will be provided

Also you can Join the Eye4you Alliance – The Tech Virtual group which is FREE to Join for more info.

Winners receive:
-$5000 USD (awarded in June of 2008)
-the chance to see your virtual exhibit made into a real exhibit at The Tech!
They will also be awarding the Teen Grid-only prize of $1000 for the best Teen Grid exhibit!

View The Tech’s page on the virtual project here!
http://www.thetech.org/techvirtual/

Image of The Tech Musuem invite 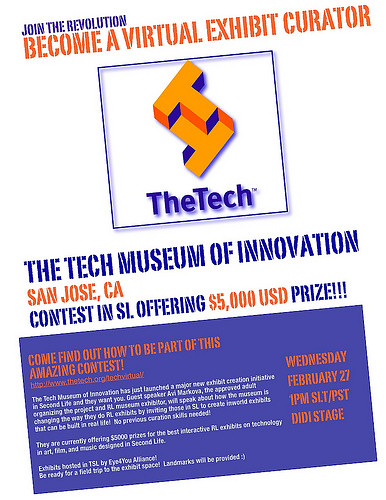 Who:  Everyone on the teen grid. The fun is in the doing — the building and sharing of ideas. The more people who participate, the more everyone wins.

What:  Come and show off your best design works and build something new right on the spot

Why:  This could be the 1st Annual Space Set Design and Prop Building Contest.

How:  Get your creative juices flowing. Come to Space Build Day.

If you have comments or questions please send an IM to:

The TSL Journal is now HERE! > The only source for all of your TSL News

How do I send it in?

Bringing you the news first!

What is a First Look Viewer?

First Look Viewers are test versions of the Second Life viewer. These viewers connect to the main grid, so that you can test it in your everyday Second Life. These are test viewers connecting to the live grid which means everything you do is for real.

Throughout this year I will keep you up-to-date on the latest updates and new pages which I’m adding to the blog! Here is the latest:

New pages adding shortly, pages above do get updated weekly

Hello Everyone, I have now decided to do my Flickr stats every 2 months plus statistics post once per month which will hopefully be interesting over the months. Thank you very much for the new comments this year and re-visiting my blog etc. Here are My Flickr Stats for February 2008 🙂 > Next stats will be April 2008

Very interesting stats this month since December 2007, Here is my last post from December 2007 stats if you wish to compare or see the difference (click here).

Been to my Daniel Voyager Flickr yet? or maybe you do know it but you don’t seem to check it often nows your chance, I upload new snapshots from TSL weekly if not then very often.

What are you waiting for…….check it out folks 🙂

How Long for: 2 Hours

Stating at: 10am SLT

What? The Tech Museum of Innovation, a rl interactive science center in California is offering YOU the chance to design and prototype interactive exhibits on technology in art, film, and music for an upcoming rl exhibition.  The best virtual exhibits will be developed as rl exhibits for The Tech, and their creators will win $5000 USD and an invitation to the rl exhibition opening. IM Avi Markova or Saryn Eye4You for more info.

Come along and enjoy the fun 🙂